Join us for a conversation with Princess Daazhraii Johnson, a Neets’aii Gwich’in writer, director, producer, actor and advocate.

On this episode of Geography of Hope, Princess Daazhraii Johnson joins us to discuss inclusion and representation through storytelling, her new short film, and her involvement as creative producer of the hit PBS show, “Molly of Denali.” We hear about Princess’ inspiration for storytelling and get her perspective on human interaction with plants, animals, and the land and waters that we all depend upon. And we discuss why seeking out and elevating these perspectives is so critical if we hope to achieve more diverse and inclusive conversations about conserving our wild places.

During the presentation, you’ll also have the opportunity to view her new short film: “Diiyeghan naii Taii Tr’eedaa (We Will Walk the Trail of our Ancestors).”

Princess Daazhraii Johnson lives on the traditional territory of lower Tanana Dené lands in Alaska. She is committed to building more narrative sovereignty for other Alaska Native filmmakers and to seeing a just transition off fossil fuels. She serves on the board of Native Movement, NDN Collective, and the Institute of American Indian Arts. Princess received a bachelor’s degree in international relations from The George Washington University and a master’s degree in education at the University of Alaska Anchorage, with a focus on environmental and science education. She has served on the SAG-AFTRA Native American Committee since 2007 and was appointed by President Barack Obama in 2015 to serve on the board of trustees for the Institute of American Indian Arts. She is a Sundance Film alum, a Nia Tero Storytelling Fellow, and a creative producer and screenwriter for the Peabody award-winning PBS Kids series “Molly of Denali.” 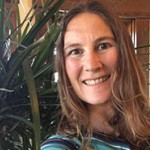