“In 2005, Royal Dutch Shell, then the fourth-largest company on Earth, bought a drill rig that was both tall, rising almost 250 feet above the waterline, and unusually round… It could go (in theory) where few other rigs could go, helping Shell find oil that (in theory) few other oil companies could find.”

Even as President Obama announces new protected areas in Arctic waters, the text above is from a piece that should be read by anyone with questions as to whether Shell (or any other oil company) should be allowed to drill in the Arctic Ocean.

By now, we have all heard the story of Shell’s failed bid to conquer the Arctic; its disastrous 2012 Arctic campaign capped by the grounding of the Kulluk drillship (described above) on New Year’s Eve; and the many issues that have kept the oil giant from resuming the campaign – including recent criminal charges against one of its primary contractors for “unreported engine failures and a makeshift hose-and-barrel system for bilge water that discharged oily waste into the [Arctic] ocean.”

In his recent piece “The Wreck of the Kulluk,” written for The New York Times Magazine (featuring a cover photo from photographer and friend of Alaska Wilderness League Gary Braasch) author McKenzie Funk gives a detailed account of the dealings leading up to Shell’s 2012 Arctic season, and the events that ultimately culminated with the grounding of the Kulluk on December 31, 2012. Shell’s interest in the Arctic grew out of the company’s own deception – Shell had previously admitted it had overstated its “proved reserves” by billions of barrels of oil, and when its stock price dropped by ten percent overnight, the oil giant needed something it could point at to make its future appear brighter.

Fast-forward to 2008, when the Bush administration offered nearly 30 million acres of remote and poorly understood ocean to oil companies via Lease Sale 193. The sale occurred despite widely acknowledged gaps in scientific information and a complete lack of proven response technologies for the harsh and unforgiving Arctic Ocean conditions. Shell purchased nearly 3 million acres of leases; the sale was highly controversial; and a coalition of Alaska Native and conservation organizations challenged it in federal court in Alaska. The legal challenge to Lease Sale 193 ultimately led the U.S. Ninth Circuit Court of Appeals to require the Department of the Interior (DOI) to re-do its analysis of the sale’s environmental impacts, and on October 31, 2014, DOI released its findings which included a prediction that there is a 75 percent chance of a major oil spill if the leases in the Chukchi are developed.

The League has been steadfast in its opposition to Arctic Ocean drilling by challenging the administration on Lease Sale 193, highlighting Shell’s inability to operate in such an unforgiving environment, and shining a light on the infinite reasons why this region needs to be protected. Examples:

The list goes on, and any one of these reasons by itself should warrant reconsidering the push to develop the Arctic Ocean.

After years of spending billions of dollars with only failure to show for it, it’s time to acknowledge that Shell has bitten off more than it can chew in the Arctic. And yet Shell is pressing forward – last year it submitted an updated blueprint for drilling new exploratory oil wells in the Chukchi Sea as soon as this year, and it’s possible that the administration could open even more areas up for leasing. Millions of Americans have asked the Obama administration to stop drilling in the Arctic Ocean based on Shell’s track record of failure. Arctic drilling is far too risky, a fact proven by Shell’s disastrous 2012 program that involved near-misses, fires, investigations, pollution violations and fines, and ended with the Kulluk grounded near Kodiak, Alaska.

The Alaskan Arctic has no deepwater port. The closest is in the Aleutian Islands at Dutch Harbor, a thousand miles to the south through the Bering Strait. In the Inupiat whaling villages dotting the Chukchi coast, only a handful of airstrips are long enough for anything other than a prop plane. There are few roads; human residents get around in summer by boat, foot or all-terrain vehicle. Shell was trying the logistical equivalent of a mission to the moon.

His piece is a needed reminder to everyone who has stood up with us to protect America’s Arctic over the last several years. Shell wants to drill in 2015, so we must keep up the momentum to stop risky drilling in the Arctic. If you haven’t already, join the Alaska Wilderness League community and stay tuned for more updates on this important issue plus opportunities for long-term protections. 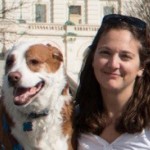