I recently had the opportunity to visit Alaska for the first time, a trip that merged work and play and allowed me to: attend a day long meeting in Anchorage regarding our National Petroleum Reserve-Alaska campaign; meet and build relationships with various League partners in Alaska; travel by train from Anchorage to Talkeetna (and meet the local mayor, Mr. Stubbs); and, have the unbelievable luck to see amazing places (Denali) and amazing wildlife (four moose!). This is a recap of my trip, and some photos I took along the way – make sure to click on each for a better view!

I took this first photo while walking along the Coastal Trail in Anchorage, joined by fellow League employee Maggie Massey and her dog Brownie. We walked a short portion of the 11-mile trail along Anchorage’s Cook Inlet coast. The trail has great opportunities for recreation, and of course beautiful views of the surrounding mountains.

Next stop was Talkeetna. Knowing my winter driving skills were not up to par, I decided to get there via the Alaska Railroad, which is located on the southern edge of Denali National Park and Preserve. On the train I was treated to spectacular views of the mountains and wild landscape along the way. Each moose we passed brought with it a heads up from the train engineers so passengers could spot them too.

While in Talkeetna, I met the honorary mayor, Mr. Stubbs. He proves cats really do have nine lives – Mayor Stubbs has survived being shot and mauled by a dog. As the look on his face suggests, Mr. Stubbs is likely tired of being photographed by tourists during his 18 years as mayor.

One of the most memorable parts of my trip was seeing Denali on a clear day. Denali is North America’s highest peak, and I was told I was extremely lucky to see the mountain like this in the winter. I took this photo along the Talkeetna Riverfront Park, where you can see three rivers – the Talkeetna, Susitna and Chulitna – converge. As cold as it was, you can still see a portion of the rivers flowing in the foreground of this photo. From left to right: Mt. Foraker, Mt. Hunter, and Denali.

At the close of my trip, I was able to snap this photo of the sun setting on wild Alaska. The coloring in the sky was like nothing I had seen before. My first Alaskan experience can only be described as unforgettable, and I am grateful to be able to connect to the place we all work to protect in a stronger way. 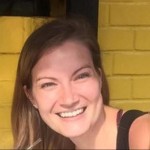